Makayla Slack broke school record in the 100 meter race and placed fourth at the WPIAL finals at Slippery Rock, and Chase Calhoun took fourth place in the shot put, sending both Southmoreland athletes to the state meet in Shipppensburg.

Slack, a sophomore, broke the school record for the 100 meter dash with a time of 12.42 seconds,  earning her 3rd place in the trials. She later ran a 12.6, a state qualifying standard, placing her 4th overall.

“Going into the race I was super nervous, but I told myself I could do it,” said Slack. “I’m beyond excited to go to states, and it’s all thanks to my wonderful coaches and amazing teammates.”

Senior Chase Callhoun placed 4th overall in the shot put with a throw of 47-1. This is his second year attending states, qualifying third a year ago.

“I was very impressed by Makayla this season. She now the single record holder for 100 meter dash at Southmoreland,” said coach Dave Keefer. “With this being Chase’s second year in a row for states, my hopes are he will  throw very well and hopefully repeat his performance from last year.

“Every time you go to states you go into it wanting to bring medals home and I hope we as a team can work hard,” coach Keefer added. 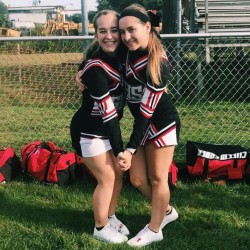