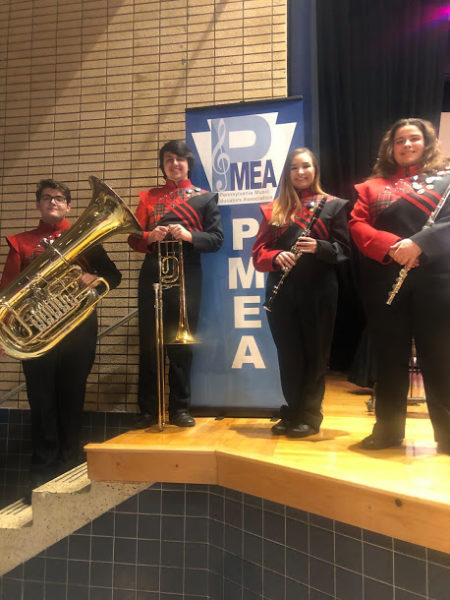 A clarinet. A tuba. A flute. A trombone. To many, these are just simple musical instruments, but to Kaelei Whitlatch, Dylan Opalinski, Ila Greenawalt, and Quay Akins, these are the keys to an escape from life. These four Southmoreland seniors have recently attended Pennsylvania’s Music Educators Association (PMEA) East District 1 Band festival.

Whitlatch, clarinet player for 7 years, had an “amazing time” at her first and last ever PMEA District Band. She is honored to have attended the event, despite it being out of her comfort zone.

“It was for sure a big step out of my comfort zone,” she said, “I was able to perform with some of the most talented students I’ve ever heard play.”

Greenawalt is no stranger to playing music in festivals. The flute player for 7 years and piccolo for 3 has been in a multitude of festivals since reaching high school.

Akins, like Greenawalt, has been playing in festivals for many years. The trombone player for 7 years is also a returning player to Region Band.

“In addition to District band, I have also been attending (WCMEA) County band since freshman year, Fay-West Honors band since sophomore year, and I also managed to make Region Band last year too,” he said.
Opalinski, however, has only been playing his tuba since freshman year. Despite this being true, he has obtained an impressive resume throughout his four year tenure of playing his instrument of choice.

“After not getting it into PMEA Honors band I was super bummed out, but once I found out I made it to districts, my confidence was restored,” she said.

The event was Akins’s fourth and final time of returning to district band. As soon as being accepted, he got to work, having his eye on being accepted into Region Band.

“I have been going to district band since freshman year. I was clearly excited,” Akins said. “Although I contained it swiftly, I knew I had to get practicing and really work hard if I ever wanted to have a chance at making Region Band.”

Opalinski expected to be accepted into Districts, since he is also returning for his fourth year, but he was also very excited for the event as he always looks forward to going to these festivals.

“I sort of assumed I would be selected for district band, since I’ve gone every year, but I always get excited knowing for sure that I’ll be going to festivals,” he said.

The students auditioned on the evening of Jan. 23.

“We had a great time telling stories on the way there. “When we got there, I was so nervous. I had never done anything like this in my life.” Whitlatch said.

The students were called back by instrument, led into holding rooms, and were given the audition pieces and the measures that they would be required to play, as well as their audition numbers. As numbers were called, the tension in the room became more and more prominent. Awaiting in the next room was a table of four judges, with their backs toward the performer, awaiting to hear each student play. Each student was given time to “warm up” and then they continued to play their prepared audition pieces.

Greenawalt has been auditioning for many festivals under PMEA and other music corporations, so she is very familiar to the audition process.

“I’ve going to PMEA auditions since freshman year so I’m pretty relaxed and familiar with the process.” she said. “It’s straightforward and although stressful, very fair. I’ve practiced my tail off for these auditions and I don’t think I could’ve felt more prepared. The audition was solid. It could’ve been stronger, but it wasn’t bad.”

Opalinski and Akins agree, despite Akins having a foreboding feeling throughout the festival after auditions.
“At this point, I am pretty used to the audition procedure which helped to calm my nerves a bit. It was certainly one of my more prepared auditions, and this left me feeling almost a hint of confidence before stepping into the judging room.” Akins said. “I wasn’t feeling so great about the audition, and ended up feeling I had played the selections for the judges worse than I typically practice them. Although clearly I had underestimated what I had actually played for the judges, it was still hard for me to shake this feeling throughout the course of the festivities.”

“I’ve gotten very used to the audition process, from PMEA festivals to college auditions, I’ve mostly gotten over the nerves.” Opalinski said. “I felt as prepared as I could for the audition, and felt great about the result. I think the audition went great.”Despite all of the other participants having a lot of experience in the audition field, Whitlatch had “no idea what to expect.”

“Out of the two pieces, I feel my second one was much stronger. I was just happy I got through the audition through my pit of nerves,” she said.

After the audition on Wednesday evening, the students returned home and rested up for the festival rehearsal process the next two days. They found out their seating placement on that Thursday morning, where they were ranked strongest to weakest.

The guest conductor of the event was Mr. Daniel Neuenschwander, a professor of music at Kutztown University.

“He was a very fun guy to be around, and he even got a selfie with us,” Whitlatch said. “You could tell he had immense passion for music and wanted to share his joy with us.”

The students had an entire two day rehearsal process to prepare their challenging pieces that they would be playing at a concert the second day.

At the banquet before the concert on that Friday, the students selected to advance to PMEA Region Band were announced. The Southmoreland students waited anxiously as names were called by section, by score.

When Akins’s name was called second, he “could not have been more elated.”

“Even though I had went (to region band) last year, I was still worried and expectedly quite nervous that my auditions wouldn’t go so well. As you can imagine, it was an amazing feeling to find out I had not only made it, but also scored second in my section,” Akins said. “I just cannot wait to play with an even more prestigious group of individuals, and also hopefully prove myself to my section in a way.”

Greenawalt agreed, stating that she was “shocked” to have made it.

“I thought I was gonna cry when I heard my name called, and I literally froze from shock,” Greenawalt said. “My goal is to make it to states, and being one step closer helps me know that my hard work is paying off.”

Opalinski, however, discovered that he was qualified for region band in a different way than the others.
“Because they always take the top 3 tuba chairs to region band, I was super relieved the morning that seating was shown.” Opalinski said. “Other people usually have to wait until the banquet before the concert because of how seating and auditions are done, but I was glad I got the nerves and anxiety relieved as soon as possible.”

Whitlatch was the only student to not have been selected to go to regions, but she said that she was still “grateful for the opportunity to even be at districts.”

“I will truly miss attending these festivals, but I am so glad my three friends get to continue on with their musical journeys,” Whitlatch said. “I can tell that music is the center of their lives, and I’m so grateful that they have been given the opportunity to play with such profound musicians. All of them, someday, will be great music educators and performers.”

“There is nothing I enjoy more in life than sitting down with a band of excellent musicians and doing what I love,” Akins said. “Although there will be more people, and there will certainly be many more chances to play, it will never be quite the same as playing with the amazing group of people that attended this festival alongside me.”