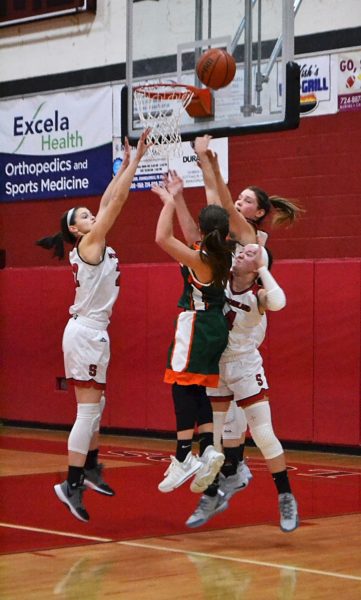 battle for a rebound against Apollo Ridge.

The Scotties took a 10-7 lead after the first quarter and improved that at the half and by the end of the third quarter. But a hot-shooting AR team rarely missed from the foul line and was nearly as deadly from 3-point range, and one point trimming the lead to just one with just under two minutes to go in the game.

In the last minute of the game, with Southmoreland up by one, 38-37, one of Apollo-Ridges players made her way downcourt on a fast break.  But freshman Bailey Kuhns, who led the Scotties with 13 points, blocked the shot to help preserve the win.

“Time was running out,” said Kuhns or her late-game heroics. “ I knew we were up by one and if she got the basket they’d be winning. I ran out my mind to get the block.”

The surprising play changed the energy of the game.

“It was a pace changer for my team as well,” Kuhns said. “It gave us the feeling for the game, our attitude changed and we realized that we could win.”

The girls advance on in the playoffs and play Feb. 21 against Blackhawk at Moon High School with a berth in the state playoffs on the line.