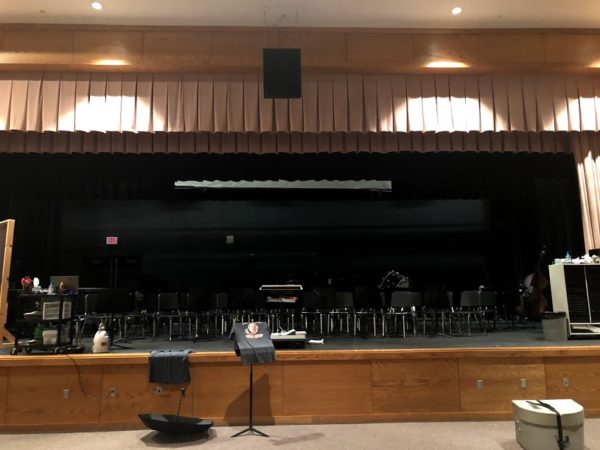 Senior and first chair flute player Ila Greenawalt spends half her day in the band room with her schedule filled with classes such as Advanced Musicianship and AP Music Theory. When she saw the band room for the first time, she had “mixed emotions.”

“I thought I was going to cry. I stood in that room for about ten minutes before I did anything else,” Greenawalt said. “It was really upsetting to see it in practical shambles, but being back in the place I call home gave off the most calming vibes and made my day so much better.”

Nearly every high school in the United States features a band room; a room where students gather to play instruments and share their love of music. For many, the band room is not just a normal classroom but a second home.  However, at Southmoreland High School, music classes are not held in the band room, they are held on stage in the auditorium.

Everything one would normally find in a band room now sits on the stage – music stands, chairs, music folder shelves, a podium, a whiteboard, and even band director Mrs. Jamie Gore’s desk.

Mrs. Gore and band students were faced at beginning of the school year with their room being quarantined due to “possible mold or mildew” as reported by superintendent of Southmoreland School District Mr. Vince Mascia. This led to students at the high school missing two days during the first week of school. More information can be found in earlier Tam O’Shanter coverage.

The missed days of school may have been the end of average students’ troubles, but this was only the beginning of the music students’ problems.

When one of the companies hired by the district, Intertek Professional Service Industries, Inc. (PSI), came to inspect and clean out the substance, it was decided that to further insure the safety of the students that the carpeting and ceiling tiles of both the band and chorus rooms had to be replaced.

At first, Mrs. Gore was “disheartened” that she had to give up her room, but she knew “it needed to be done.”

“It was certainly a surprise to have to redo everything I’ve done for the past 13 years,” Mrs. Gore said. “My biggest concern was starting the school year off with a routine, even with having that routine severely disrupted and the accessibility off all of the supplies we need.”

With no set date to return to the music rooms, the district received 3 bids to replace the carpeting in the band room. At the school board meeting on November 11, the board approved to pay for the carpet replacements in both the band and chorus rooms.

After hearing of this news, Mrs. Gore was “overwhelmed” at the state of the band room.

“When I walked in this room for the first time (since the mold and mildew was removed), there was still plastic up (on the air vents) from the remediation,” Mrs. Gore said. “It was overwhelming to see it in that condition. As silly as it sounds, the carpet is what helped make this room what it is.”

Until the carpeting is installed, Mrs. Gore’s classes will be held onstage.

This creates issues for Mrs. Gore and students alike as they lose valuable rehearsal space. So far, Mrs. Gore said it has been an “interesting adjustment.”

“The stage isn’t a bad rehearsing area for the band, but it is difficult when we want to have small ensemble rehearsal or when students want to come down to practice. It’s a very loud environment for that type of atmosphere,” Mrs. Gore said. “It’s hard to have multiple events going on at a time since we lost many of our practice rooms such as the electronics room and the colorguard room. People could still have discussions and do their homework since there were other spaces.”

Greenawalt said using the stage as a classroom “comes with its benefits and downfalls.”

“It gets the ensembles used to the performance space and it’s great for the many different groups’ sounds,” Greenawalt said. “However, I feel like I’m not as productive with my practice sessions because there’s not always a room to go in.”

Using the stage for rehearsal is sometimes difficult due to it being a shared space in the school. With needs such as district-wide band and chorus concerts and musical auditions, it is a challenge for band classes to even be held.

“We get moved a lot (from the auditorium) because of other needs for the stage,” Mrs. Gore said. “It can’t be avoided but it does make continuity a little difficult.”

The set up of the stage-turned-classroom is a challenge as well.

“There’s no lockers and there’s thousands of dollars worth of instruments sitting on tables instead of being protected in lockers,” Greenawalt said. “I literally can not wait to go back in (the band room) and be able to stay there and use practice rooms and lockers.” 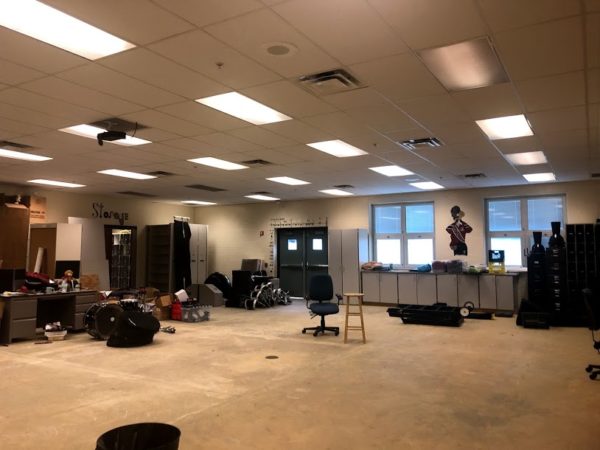 The band room on November 21

As for the band room, Mrs. Gore calls its current state “chaotic.”

“I don’t live in chaos usually, and it’s hard to find anything. We’re trying to sort through everything before (the crews) are able to come in and start putting in the carpeting,” Mrs. Gore said. “We’ve got new ceiling tile and are getting new flooring, so everything in here is much cleaner than it’s ever been.”

Mrs. Gore is now hoping to be back in the band room by January.

“There’s an order and a familiarity and a home in this room though it’s half the size of the stage,” Mrs. Gore said. “We’re all really excited to get back. It’s been overwhelming, but I hope it’s all worth it in the end.”