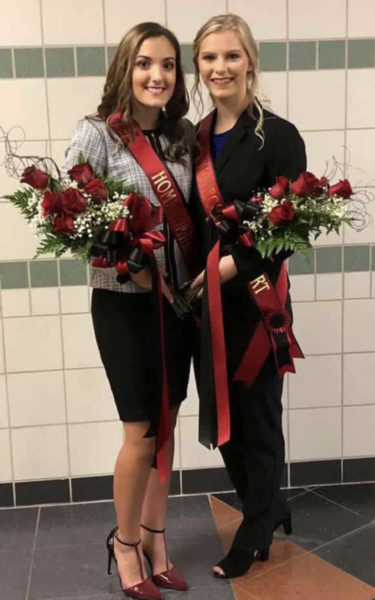 Tessa Hamborsky and Alyssa Gaborko were recently voted Best Friends as their senior superlative. Little did they know, but the best friends would end up standing alongside each other as members of the homecoming court.

“When they were announcing the court, they announced (Gaborko) right before me. She is my absolute best friend, so when they called her, tears came to my eyes because I was so happy for my best friend,” Hamborsky said. “Then they called my name and I had to clear up because I didn’t want people thinking I was tearing up for myself, I was tearing up because I was so happy for Alyssa. After being announced, the first thing I did was hug Alyssa.”

After being announced at the pep rally, the court of 7 female and 7 male students began their duties as court members, such as being in the Scottdale Fall Festival parade and walking on the field before the winners were crowned.

“The parade was exciting and something that I’ll never forget, but my favorite part was the game,” Hamborsky said. “I loved getting all dressed up and all the pictures I took with people. Before going down on the field, I wasn’t nervous until I was actually there.”

Escorted by her uncle, Hamborsky said she “couldn’t stop shivering” as she walked underneath an umbrella.

“It was so cold the night of the game and my toes were numb. I was nervous cause my heels went into the turf a little bit so I was scared I’d trip,” Hamborsky said. “When the halftime show started, I loved having my uncle be right next to me because he is one of the most special people in my life.”

On the night of October 12, Hamborsky said that she was “happy for everyone that was on the court” and would be glad for whoever won. She said, however, that she was “genuinely surprised” when she was announced homecoming queen. 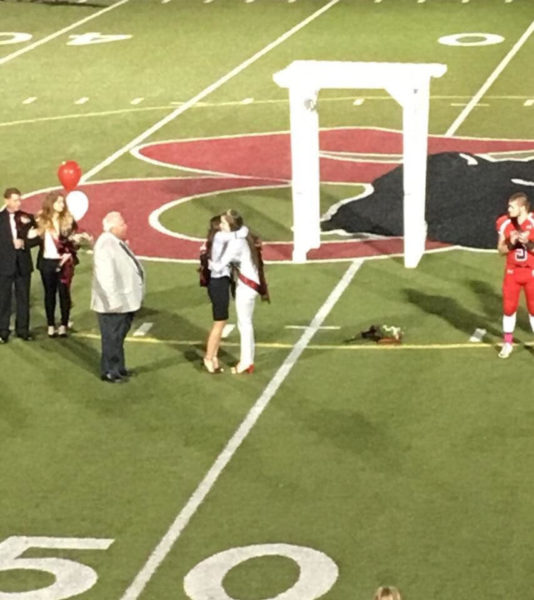 “When it came time to announce the queen and king it all happened so fast. First they announced Chase (Calhoun) was crowned homecoming king and I was so unbelievably happy for him,” Hamborsky said. “Then they went to announce the queen and everyone went silent. Then, the only thing I thought was, ‘Oh my God, they just said my name.’ All I was focused on was walking to (2017 homecoming queen) Brooke (Corley) without tripping because everyone was looking at me in that moment. I was so happy that I tuned everyone else out. I was just so excited to be getting crowned that I don’t even remember hearing cheers or anything else.”

Calhoun was crowned king by 2017 winner Jason Szadkowski, and Hamborsky was crowned by Corley, which she believes “made the moment even more special.”

“(Brooke and I) have known each other and have been friends since we were little,” Hamborsky said. “She has always been someone I have looked up to.”

Hamborsky said that she was so happy after she won that she cried, saying that it was “so unexpected” and that it is “an amazing feeling knowing (her) peers voted for (her).”

“Coming up from the field after being crowned I went to find my family, there were so many people waiting for me,” Hamborsky said. “When I saw my aunt crying she made me cry all over again because knowing she is proud of me means the world to me. It meant so much to know I had so many people’s support. I have never been so overwhelmed in happiness than I was that night.”

Gaborko was very fortunate to have spent her time on the court alongside Hamborsky.

“Being on the homecoming court was a great honor. Being a part of the court with my best friend was a dream come true,” Gaborko said. “When they announced (Hamborsky) over the loud speaker, I couldn’t have been happier. She really deserves being the queen, and I was glad to be a part of this experience with her by my side.”

In the future, Hamborsky plans to attend a 4 year college to study to become an elementary teacher because of her “love for children,” or to study marketing.

Hamborsky, after walking on the field during senior night on October 26, offers advice to upcoming seniors.

“My advice to others is to always be nice and always be yourself. My aunt has always told me since I was little to always be the bigger person and to be nice to everyone no matter what,” Hamborsky said. “Also, cherish all the memories you will make. The time goes fast, so enjoy every moment of it. Being on the court and winning queen is an experience that I will forever be grateful for and will always remember.”