Southmoreland senior Doug Leighty and his team of fellow All-American high school football players got off the bus at Tampa Bay Buccaneers’ Raymond James Stadium on Jan. 9. Leighty, along with the rest of the North Side team, were about to make history once they stepped onto that football field. And they had no idea.

“Before the game, I was just so excited to play because it was the sport I love to compete in,” said Leighty. “After the game I was even more excited and I felt we really accomplished something because we won.”

The North Side team’s 35-0 victory over the South Side team was the first North Side victory in the program’s history. It was also the first shutout in the history of the Blue-Grey All American Bowl. 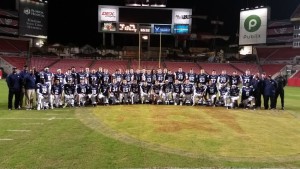 Looking back on the experience, Leighty is extremely thankful to have gotten the opportunity to compete with other talented high school football players from across the nation.

“Sharing the field with those other talented players and competing with them was a great experience,” said Leighty. “I’m very thankful and blessed for getting the opportunity to play in the bowl game.”

Back in May 2015, Leighty received an invitation to a combine where the participants were told that they would receive an invitation to the Blue-Grey Football organization’s Super Combine if they performed well enough. Leighty was invited to the “Super Combine” where the players were told that if they performed well again, they could expect to receive an invitation in either August or September to participate in the 2016 Blue-Grey All American Bowl.

As November set in, Leighty began to doubt that an invitation would arrive, but he did receive an invitation to the bowl game later that month.

“I was both amazed and determined when I got my invitation,” said Leighty. “It was a great honor, and I knew it was a big stage to play on so I was determined to play my best.”

Leighty explained that given the talent on the field, the pace of the game was faster than what the players were used to. However, the high school All-American players adjusted to the new pace fairly fast. Not only did Leighty get to play on the same field as other talented football players, but he was also coached by former NFL players. Leighty’s head coach was Arlen Harris and his offensive coordinator was Arlen’s brother, Aaron Harris.

Arlen’s first two seasons in the NFL were spent with the St. Louis Rams during which he was the second leading rusher following Hall Of Famer Marshall Faulk.  Arlen continued his NFL career with the Detroit Lions and then the Atlanta Falcons. Arlen’s brother, Aaron, is a NFL veteran with the Tampa Bay Buccaneers.

Leighty’s whole family was very proud of him for getting the opportunity to play in the bowl game. His younger brother, John, is currently a sophomore quarterback at Southmoreland. He was especially excited to see his brother and teammate play in the game.

“I thought it was amazing to be able to see my brother playing on an NFL field,” said John.

Doug Leighty is happy that he was able to be someone his younger brother could look up to. Especially when it comes to something they both love. Football.

“I love football,” said Leighty, “My favorite part was just the game.”

This experience at the Blue-Grey All American Bowl has proved to be an experience that Doug Leighty will never forget. It provided an opportunity to “show himself to college coaches,” which he is thankful for. Since the bowl game, Leighty has committed to Saint Francis University with a full scholarship for football.

I'm a senior at Southmoreland and an editor. I participate in many extra curricular activities and enjoy telling people's stories.

I'm a senior at Southmoreland and an editor. I participate in many extra curricular activities and enjoy telling people's stories.

1 Comment on Leighty plays in Blue-Grey All American Bowl